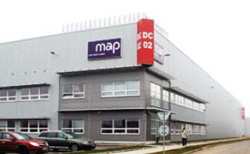 "We tried solutions from various providers but only ZyXEL demonstrated the equipment, its configuration, and made an offer that was the most advantageous for us. The company management decided that the ZyXEL-based solution would be implemented."

The company Map Merchant Czech Ltd. residing in Zdiby is a wholesale organization in the sale of paper products and is the subsidiary company of the Map Merchant Group Ltd. international concern residing at London. Map Merchant Group ranks among the largest European wholesaler; it sells 1.3 million tons of paper per year to its 50 000 customers in 22 European countries. Map Merchant Czech also ranks among the largest Czech wholesalers in paper. Aided by its parent concern, it has built a very good position in the Czech market. Thanks to its assortment offer and servicing level, it is one of the progressive trading companies in the Czech Republic.

"We tried the offers and solutions of various providers; ZyXEL was not in play at that time yet. I learnt about its product -  firewall of the ZyWall series -  in Slovenia," says Bedrich Beck, Regional Datacenter Architect of Map Merchant Czech. "ZyXEL demonstrated the ZyWALL equipment, its configuration, and made such a quotation that was the most advantageous for us. Therefore, the company management decided that the ZyXEL-based solution would be implemented", adds Bedrich Beck.

AEC Ltd. worked as the consultant for the project. On the basis of the client's inquiry, i.e. Map Merchant, AEC Ltd. suggested the optimal solution and was also the major supplier of the hardware. "The customer required hardware solution characterized by high availability and also very good scalability -  i.e. containing antivirus module, antispam filter, web-site content filter, IDP signatures, Vantage Reporter reporting instrument and, last but not least, also the instrument for the central administration of all firewalls. The solution of ZyXEL was in full compliance with the requirements," explains the details of the project Zdenek Kotlik, IT Security Consultant of AEC. "In addition to it, the customer had the possibility to borrow the equipment and to test it in real operation and, thanks to that, appreciated very much the reliability of the equipment. The customer's impression was augmented by the fact that the equipment has the ICSA Labs certification, both for the firewall and IPSec VPN. As a matter of fact, the equipment thus meets the severest criteria laid on the equipment in safety," added Zdenek Kotlik.

Map Merchant Czech Ltd. operates first of all ERP Scala system in the common network at present but further applications may be taken into consideration in the future. "The volumes of data transmitted by the network are not definite up to now; it is only approximately 1 GB daily at present but it may be even ten times as much soon," explains Bedrich Beck and adds that it is the reason why the corporate network has such a large reserve just from the point of view of the transmitted data volume.