Since it was established in 1990, Namesco has moved from a domain registration company, to a web hosting and broadband ADSL provider with 67,000 customers. Although this has increased revenues and secured a loyal client base, Namesco decided that they wanted to be involved in something new that would not only show that they were a technically innovative company but also help them grow their existing client base. TVMAX, a service aimed at bringing back the social element of watching television by transmitting online programmes straight to people's TVs was the idea that they hoped would secure this. 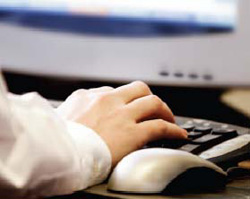 In order to drive demand for this new concept, Namesco needed to ensure that the technology used for theTVMAX service was compatible with as many TV configurations as possible. It would need to be aesthetically pleasing as it would be on show in the living room. It would also need to be compatible with Macs and not interfere with bandwidth needed for other applications within the household. After evaluating many router manufacturers to partner with including Netgear and Buffalo; Namesco's reseller Caldwell, chose ZyXEL's products because they were the smallest boxes on the market, their neutral black colour, their aesthetically pleasing appearance and triple play product features.

"All our customers are different and use the internet for different things," commented James Griffin, product development and marketing manager, Namesco. "Therefore, we needed a solution that would ensure bandwidth was kept equal across all applications yet also cater for the needs of home workers and casual users alike. ZyXEL's routers were not only the most aesthetically pleasing but also offered a huge range of options which we could in turn offer to our clients. As ZyXEL's products were also reasonably priced, we could offer our service to customers at an extremely competitive price and still make excellent profit margins. "

The Project
In today's digital household, multiple media streaming has become as common as the family microwave. Although most ADSL routers have been able to cope with the sending of information, receiving information has frequently caused problems. With so much data going through the cables this has led to blockages, resulting in other applications suffering because of the reduced bandwidth.

Therefore the technology Namesco chose for the TVMAX service would need to support the wide stream of traffic needed for digital living such as VoIP and online gaming. ZyXEL's ADSL products, optimised for triple play applications were ideal as they allow large amounts of equal bandwidth to be allocated to different applications. In addition, ZyXEL's wide router range meant Namesco could also offer their customers three levels of the TVMAX service and charge accordingly. 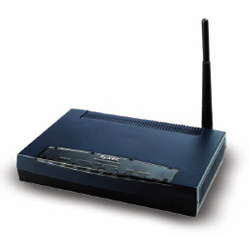 As a result of their customers' wide range of needs, Namesco decided to offer three different levels of routers. The Prestige 660RU, an all-in-one ADSL Ethernet and USB Combo Router was offered as standard, because its easy installation made it ideal for first time ADSL users. More advanced users who required additional security features in addition to bandwidth management, were offered the ZyXEL Prestige 660H ADSL router with firewall features and Media Bandwidth Management functionality.

The highest level of router, the Prestige 661HW Wireless and Ethernet Router, was offered to home workers because of its addtional VPN and wireless features. These gave home workers the chance to take advantage of additional default services from TVMAX as well as reducing the cost of implementing VPN and wireless-based routers.

The Benefits
A combination of sleek looking ADSL routers optimised for triple play applications has allowed Namesco to provide their customers with a broadband to television service that will not interfere with the bandwidth required for other applications. As a result of ZyXEL's flexibility and wide product range, Namesco has been able to develop suitable packages for customers with little broadband knowledge in addition to home workers.

ZyXEL's cost effective routers have meant that Namesco has been able to offer an excellent bundle to customers which includes access to freeview, up to 8mb broadband, email access, a digital video recorder and a media centre for just 23.95 Pounds per month with a one off set up fee of 39 Pounds and still make excellent profit margins.

ZyXEL is also able to offer any support Namesco or its customers require after implementation as a result of ZyXEL's aftercare support. ZyXEL's reputation for being number one in DSL, coupled with the initial success of the new service, have meant that Namesco has decided to swap all their BT Voyager routers to ZyXEL's across all their services.

"The TVMAX service, which we have been able to offer at an excellent price to existing and new customers, has really made a difference to our service and has helped position us as a leader in innovation and quality. We are extremely pleased with ZyXEL's products and flexibility which have allowed us to create an all in one solution, and we are confident that we can now offer all our customers, from beginners to internet savvy customers, a service that will bring the family together and stop them crowding around a tiny PC screen," concluded Griffin.
Back to Success Stories