Zyxel bags channel service honors in US and EMEA

Hsinchu, Taiwan, October 17, 2022—Zyxel Networks, a leader in delivering secure and cloud-powered networking solutions, has been recognized on both sides of the Atlantic for its channel services, honored as a ChannelPro SMB All-Star in the U.S. and at the European MSP Innovation Awards. 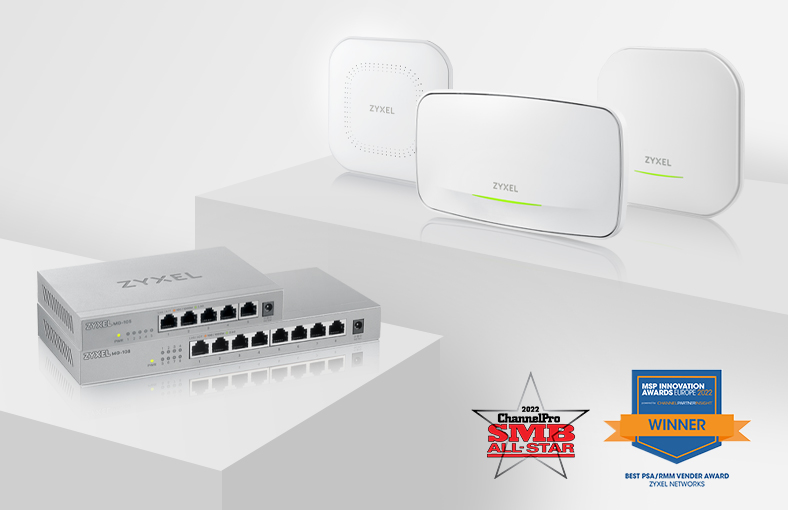 The honors highlight the trust and goodwill that Zyxel has built in these high-value markets by supporting the unique and pressing needs of partners in each, according to Crowley Wu, Zyxel Network’s vice president of sales and marketing. The recognition also underscores Zyxel’s growth into one of the world’s leading networking brands, Wu said.

“In the U.S., a top focus of ours has been helping SMBs by providing innovative products that speed up their migration to multi-gig speeds, so they can unlock potential trapped behind slow speeds,” he said. “Whereas in Europe, we’ve used our Nebula cloud management solution to help our partners weather the storm brought by the Covid, supply chain, and inflation crises.”

The only awards program of its kind in the channel, the ChannelPro SMB All-Stars recognizes IT hardware, software, and service vendors whose products, programs, and initiatives have significantly impacted the SMB channel in the last 12 months. Candidates are assessed by the ChannelPro Network editorial team, with input from outside experts and channel partners.

Zyxel was among the small number of industry-leading innovators selected as a 2022 ChannelPro SMB All-Star, with other honorees including AMD, Cisco, and Microsoft. The judges cited Zyxel’s MG-105 5-Port 2.5GbE Unmanaged Switch and MG-108 8-Port 2.5GbE Unmanaged Switch as having market-changing potential, giving SMBs an affordable way to utilize the speedy 2.5GBase-T Standard.

The independently adjudicated awards recognize vendors, distributors, and MSPs that demonstrate industry leadership. The recent confluence of crises affecting Europe has played to Zyxel’s strengths in innovation and customer service, particularly its Nebula cloud management solution, according to Wu. “By allowing more than 80 types of network devices to be configured and controlled in one place, Nebula has given customers flexibility and efficiency in terms of time, resources, and expenditure that has proven invaluable to their survival,” he said.

The ChannelPro and Channel Partner Insight accolades come on the heels of other recognition at home and abroad over the past two years. This has included being the only networking company named among the Best Taiwan Global Brands as well as earning honors at the Taiwan Excellence Awards – more than any other networking brand.