The Deanwater Hotel is a privately owned and managed hotel. It chose ZyXEL's broadband gateway products and G-4100 wireless access points and printers in order to improve customer service so guests can access the Internet anywhere.

Access for All
Although the hotel wanted to provide its clients with broadband technology in every section of the building, as an independent hotel it was important that it could manage the cost of the investment and the return on it. The hotel had to ensure that they could recoup the value of the investment quickly and effectively, it had to be its own system rather than something provided by The Cloud, for example, where they would only get a kick-back on the profits made. Computer Assurance had to help The Deanwater find a solution that would prove to be a sound financial investment, without needing huge amounts of technical support on site.
Irene Susca, owner, The Deanwater, was keen to stay ahead of the game, "We are an independent hotel and so we have to be more careful about the risks we take with emerging technologies, however, it is also vital that we are able to offer the same modern facilities as our competitors. We were keen to implement broadband throughout the hotel but we wanted a simple way of charging for it in order that we could quickly recoup the investment." 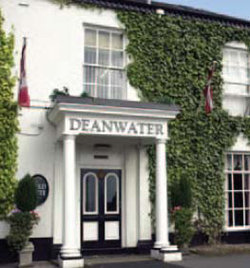 Computer Assurance recommended putting in place two wireless hotspots, covering the two conference rooms and the public areas of the hotel. Furthermore, they chose to run VDSL into each of the 44 guest rooms, offering broadband speeds of up to 20Mb/s. They also recommended that The Deanwater implement an automated ticket printing billing system in order to enable simple billing for anyone using the connections. Two access points and one ticket printer were installed. Computer Assurance chose ZyXEL's broadband gateway products and G-4100 wireless access points and printers in order to complete the installation. Two access points, one gateway and one ticket printer were installed. The gateway enables reliable broadband access, while the G-4100 wireless access point with ticket printer ensured simple and accurate billing.Melissa Young, office manager, Computer Assurance, recommended implementing ZyXEL's products. "ZyXEL was the obvious choice for this implementation. The G- 4100 offers a simple solution which is easy for the hotel team to use and manage. The products were not only affordable for The Deanwater but they are the best on the market for this kind of implementation and offer important interoperability for the existing technology running in the hotel.""We don't have a designated IT department at the hotel so the idea of having full remote support from Compassure was a real selling point for us and it was reassuring that we had them on hand. The ZyXEL products are really simple to use and it is easy to train people to work them. Most importantly the installation didn't require us to have any technical skills in-house," continued Irene.

The Deanwater Stays Ahead of the Competition
The Deanwater experienced an extremely fast implementation time, from the decision to upgrade to the actual go-live stage took just five days. The Deanwater was able to be quickly up and running, offering important connectivity to guests at a level expected by its discerning business visitors.