Highdown Secondary School upgraded their ageing 10/100 copper switches to ZyXEL's 3000 and 4000 series of switches to support large numbers of students and staff connecting to the network at the same time. The solution provide QoS for all applications including a campus-wide CCTV network.

Supporting a Growing Number of IT Users 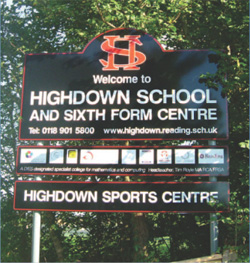 Highdown is a specialist maths and computing college, and demonstrates a distinctive mathematics and computing ethos within the school and local community. For a school that's so focused on teaching ICT, it's unsurprising to discover that it places a high priority on ICT resources. There are over 500 PCs in the school, giving it a well above average ratio of students to PCs. There is also three permanent staff working in the IT department.

When the school received 2m pounds investment to build a new school hall and drama studio, providing network connectivity with the main school building was one of the IT department's top considerations.

ZyXEL reseller, MMCS Group, provided a quote to install fibre cabling connecting the new building to the main school network. The project was then put on hold until the summer, as it would have proved too disruptive to carry out the work during school term time. In the meantime, the project broadened considerably in scope.

Highdown's IT manager, Ken Macrae, decided to upgrade the school's aging 10/100 copper switches in favour of the 4000 and 3000 range of Gigabit switches from ZyXEL to support large volumes of students and staff connecting to the network at the same time.

The legacy network had not been designed with such a high volume of network users in mind and needed updating; upgrading to ZyXEL's reliable and intelligent switches would increase the speed of the interconnections between locations.

At the same time, Macrae decided to install a new campus-wide CCTV system, as many of the school's existing analogue cameras were in a state of disrepair. ZyXEL's 4000 and 3000 series of switches were chosen to ensure quality of service for the new IP CCTV system, which runs over the same network infrastructure that the standard data network uses, but is segregated by VLANs (Virtual LANs). This builds in security between the CCTV and data streams, and would allow further segregation such as between administrative and student users, should it be required. The managed switches allow priorities to be assigned to make the most effective use of the available bandwidth.

The network has been designed to provide multiple gigabit fibre connections between different locations on the 18 acre site to enable high speed data transfer and ensure resilience is built into the network. The core switch deployed at the heart of the network is ZyXEL's Gigabit Fibre Ethernet switch, the GS-3012F. Connecting out to gigabit copper cables at various locations around the school are ZyXEL's ES-2048 series of Fast Ethernet Managed switches. The main distribution switches have been placed into a ring topology. This provides additional resilience in the event that either a switch or cable fails, as the network will continue to work even if a failure occurs.

Other switches deployed at locations around the campus include the GS-4024 series, ES-2048 series and ES-3124-4F series, as they provide gigabyte interconnections while ensuring the quality of service and resilience that the school needs. Highdown already had a slow 802.11b wireless network but intends to upgrade this using ZyXEL's Prestige 660HWs wireless routers and NWA-3100 wireless access points.

Adapting to the School's Evolving Needs 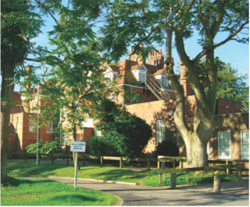 Macrae did consider alternative solutions from other suppliers, but was convinced ZyXEL's range of switches offered considerable advantages. "ZyXEL offered a wide range of products to suit the varying needs of the school's developing network," he explains. "We were impressed by the ease of use of the technology, the access to support and information they provided, and having a local company backed by the manufacturer to oversee the installation and development of the project."

As it would have been too disruptive to carry out the work during term time, the installation took place during the summer holidays. MMCS oversaw the physical installation of the cables and cameras around the school premises, and configured any switches where necessary. ZyXEL provided additional assistance with the design and installation of the network topology.

ZyXEL Delivers a Future-Proofed Network
ZyXEL's technology supports students using the school's extensive IT facilities by providing the backbone for the data network and supporting wireless connectivity to remote parts of the 18-acre campus. The CCTV network provides a safeguard against vandalism or other offences on school property.

Schools face considerable budgetary constraints and it can be a challenge for IT teams to build a business case for investing in new technology, when priority is given to supporting students' learning and development. This is why Highdown's Macrae was so impressed with the value for money that ZyXEL switches offered. "They provided so many features as standard," he says. "We wanted four to five fibre ports as standard with gigabit switching. ZyXEL provided this and offered power over Ethernet as an option as well, which meant we didn't have to provide power cabling to areas on the campus that were difficult to reach."

ZyXEL technology provides a resilient IP backbone, which will support the school's needs now and as they evolve in the future. So should Highdown want to invest in Voice over IP in the future, for instance, the IP network will be able to ensure quality of service not just for data and the CCTV system, but also for voice and video traffic.