"The main appeal of the Wireless Channel Blanket technology is that it can manage a large density of users accessing the network at the same time. The fact it was also easy to deploy and will be relatively painfree to manage, makes it even more useful."

Greenhill School in Tenby is one of the largest and most successful schools in south west Wales. There are about 1,300 pupils – just over two hundred of which are in Years 12 and 13 – and more than 150 staff. Pupils in the sixth form have access to a wide range of courses from A-levels and AS-levels to a BTEC First Certificate in Travel & Tourism. Greenhill School also believes in supporting its sixth formers with a modern ICT learning environment. For such a large school, it has shown a flexible and innovative approach to updating its ICT equipment regularly and also welcomes the trend for more sixth form students wanting to bring in their own laptops to use in lessons and during free periods.

Greenhill School has worked closely with staff at Gaia Technologies for several years. They have a trusted relationship, so it was inevitable that they would turn to a trusted partner when deciding how best to address the school's network concerns. Gaia Technologies solution was the Wireless Channel Blanket Controller and four dual access points from ZyXEL. 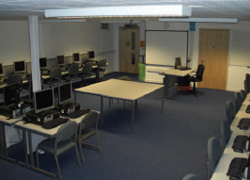 ZyXEL Delivers an Enhanced Learning Environment Today – and into the Future

"The wireless equipment from ZyXEL simply connects into our network to provide wireless access for Years 12 and 13 in the sixth form block," says Shorter. "It improves their learning environment as it means they can spend their free periods more productively researching or working on coursework, rather than waiting for a spare computer to become available or a web page to load."