As mobile devices such as smart phones and tablets consume more wireless broadband, the crowded bandwidth has become a big issue to operators. Mobile broadband is a better solution than fixed-line broadband for its lower investment and faster deployment. However, since fixed-line has been the major broadband infrastructure in most places of the world for a long time, people are already using fixed-line for broadband Internet connection in most cases. Migrating from fixed-line to mobile broadband may need extensive evaluation, however adding mobile broadband as a backup for better performance or stability could be an easier decision.

The Zyxel LTE7400 Series comes with the critical features “the second WAN” needs – flexible routing mode with both bridge and router function, high-gain antenna for better signal and performance as well as outdoor design with robust IP67 hardware for harsh environments. No matter you have a router device or not, the LTE7400 Series can be easily deployed and integrated into your existing environment. You can set LTE as your main connection, or use LTE as a backup when performance of the main connection drops. The LTE7400 Series is good for any venue like suburban areas, public locations, homes and offices. Enjoy LTE technology with minimum effort with the LTE7400 Series. 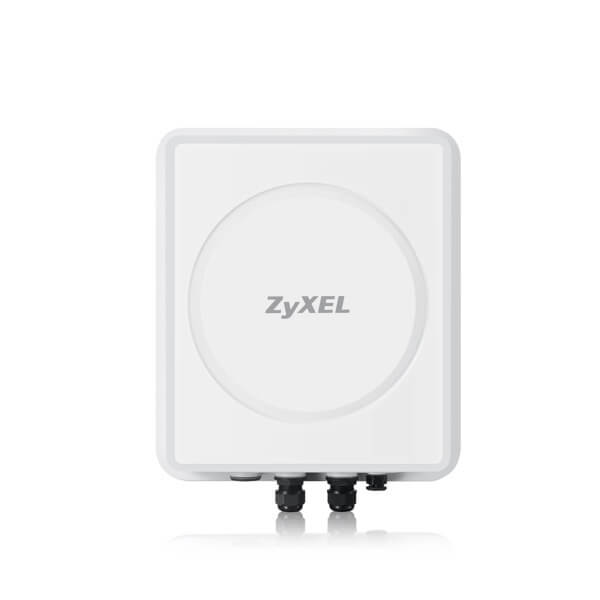 Embedded bridge/router mode adapts to all kinds of devices/gateways

For better network integration, Zyxel embeds both bridge and router modes into the LTE7400 Series. Users can take advantage of the built-in routing functions in all typical applications, while the bridge mode is designed to work with users’ existing or preferred devices such as high-end Wi-Fi Access Points, Small Business Gateways or Enterprise Gateways. With the two built-in modes, the LTE7400 Series can be easily integrated with all kinds of devices/gateways.

One concern for LTE technology is that the utilized frequencies vary in different countries. In many cases, operators apply different frequencies for metropolitan and suburban areas due to the high/low band frequency nature. The LTE7400 Series supports multiple bands to avoid this trouble among different places; the outstanding high-gain antenna supports up to 10 dBi (band 3/7/20 model) in multi-band design also provides enhanced LTE signal for better performance.

The “Ingress Protection Marking” is the scale to classify and rate the degree of protection provided by mechanical casings and electrical enclosures against intrusion (from body parts such as hands and fingers), dust, accidental contact and water. The LTE7400 Series is rated as IP67, which means “dust tight” with no ingress of dust (the top level) and it allows water immersion of up to 1 meter with no negative effects. The LTE7400 Series is a truly robust outdoor device for all places.

The SIP-based VoIP signaling supports IP telephony service deployments, and the sophisticated voice compression and QoS mechanisms allow high quality voice communications. As most feature-rich business gateways do not support VoIP, the LTE7400 Series offers an alternative to work alongside with such business gateways.